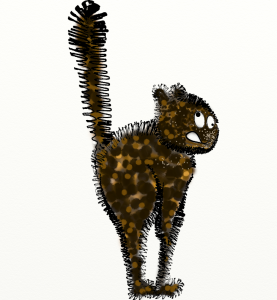 As many of you have observed, the housecat tail seems so have a life of its own.

Even if the rest of the cat shows no discernible activity, the tail can be very busy: wriggling like an earthworm with nausea, darting along like a honeybee or swishing left and right like a Mercedes-Benz windshield wiper. If the cat’s asleep and you tickle the tip, it bends away from the touch without the cat waking up.

What could be the cause for this strange autonomy? Let us consider the idea that cat and tail have not always been one. Once upon a time, not very long ago – for those with long memories, and not very far away – for those with long legs, there were cats without tails and tails without cats.
The cats without tails got by fairly well, though they deplored the fact that something seemed to be missing from their silhouette; and sometimes they also felt a strange emptiness when sitting ornamentally, and wishing to gracefully curl something about themselves – but what?
They also felt that their balance while jumping could be improved – though it was by no means very much off, there was still the occasional equibriliatory disturbance that had caused many a bruise and quite a few affronted dignities.

Meanwhile, on the other side of the country, there lived a colony of furry tails. They curled and wriggled around a bit in their cozy valley, but they did not get very far so that most of them were perpetually stuck in what seemed to be a giant Gordian Tail King. There wasn’t much rejoicing, and much gnashing of teeth – in a manner of speaking, of course.

Until one day, a tail named Bob escaped the Gordian Tail King by a series of convoluted wriggles that would give any topologist a gnarly headache – and off he went, wriggling merrily, dashing along the countryside with great quavering leaps and undulating bounces. He was glad that he finally made it out of the community, because as tails go, he was a bit of a solitary guy. The day went on, the Sun set, and eventually he halted by the side of a clear lake, in which the moon reflected dramatically. Suddenly he felt a shiver travelling down his body and he realised that he had strayed very far indeed, and that he was now, for all practical purposes, lost. For tails have no eyes or ears, and no builtin GPS receivers either. Not that that would have made any difference though, since there weren’t any GPS satellites back then anyhow.

As chance would have it, on this same day a cat had also strayed far from her feline companions. She was a spunky one called Azoupizou “Week Special” McGillicuddy IV – or Azou for short. With the nose in the air, she had gamboled and frisked merrily along, wholly forgetting to mentally mark waypoints so that now she, too, found herself utterly lost. And what’s more, she had also strayed to the clear moonlit lake, at the shores of which our friend Bob Tail had now lapsed into a state of broody sulking.
She made her way to the water’s edge and drank from the sweet water. The ripples wavered across the face of the moon, that seemed to be looking at her in mockery: “You silly cat! Look what you have achieved, with all that spunky gamboling!” She licked a droplet from her nose, and started to groom herself because she really had no idea what to do next. It became darker and darker.
When she was done, she padded through the dewy grass alongside the shore, hoping to find maybe a nice place to spend the night. But suddenly, she spotted Bob Tail, still sulking to himself.

“My, what a strange creature that is!” Azou thought, “I wonder what it is? It looks like a hairy earthworm! I wonder if it’s good company, or dangerous, or maybe edible? Or just a piece of odd environment?”
She tapped Bob, who jumped up, decided that he didn’t have a clue what to do, went through a series of gnarly loops that would have caused any old salt to raise his eyebrows in admiration, and eventually curled up in defense.
Azou was fascinated. She looked a Bob and purred like a diesel generator.
“Heya mister!” she said.
“Y-y-yes?” Bob said, timidly.
“Are you lost, by any chance?”
“Ehm. Yes. Or, I think, at least, so it seems. Yes. Definitely.” Bob swallowed with some difficulty.
“So am I, I’m afraid. I may have been gamboling all too friskily along, if you catch my drift. It may be that my lack of equilibrium has contributed to this stituation to a significant degree, you see.”
Bob didn’t see it. But he said: “I see. I’m sorry to hear that.”
“You see, mr …. ?”
“Bob. Bob Tail’s the name.” Bob said.
“… Mr Bob Tail .. mind if I call you Bob, Bob?”
“Not at all … after all, Bob is my name.”
“Yes. Rrronc. It’s just that we felines have a way of being elaborate, you see.”
“Aha.”
“Anyhow – are you familiar with the concept of Symbiosis?”
“Surely you mean the collaboration of two species to their mutual benefit?”
“Spot on! I was thinking that we might have stumbled upon such a case here.”
“Where? What?” Bob wriggled about frantically.
“No, no, no … ” Azou could barely prevent Bob from wriggling right into the lake. “Can you hold still for a moment please?” Azou said, gently padding Bob back to safer terrain.
“Ah yes. Of course. I’m terribly sorry. It’s just our nature.”
Azou sat down again, keeping herself between the lake and Bob. “You mean, you do that a lot?
“Only if we’re excited. We can also be mightily contemplative.”
Azou relaxed. “Would you like to strike a deal, Bob?” she purred.
“What about?”
“Oh my … not the sharpest tool in the shed, are we?”
“Of course not … we’re Tails. It’s not required.”
“Never mind. What if we were to form a union, you and I? You seem to have just the right size to balance me out; and I kind of like your wriggling in an esthetical sense. It would provide me with just the right counterpoint in order to maximise my natural elegance. It only needs to be fixed at one side – at the back of my spine, that seems to be the best option.”
“What’s in it for me?” Bob said.
“Well, you get carried along in a much more purposeful manner than you could hitherto have imagined in your wildest dreams.” Azou stated dryly.
“Wow. No more being entangled in a giant Tail King?”
“I daresay not.”
“Deal.”

And so it happened that, ever since that night at the moonlit lake, cats have tails.